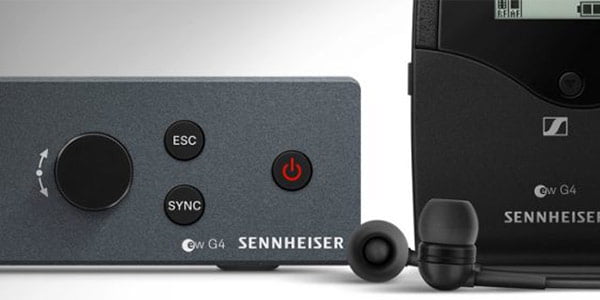 Most musicians or singers perform better if they can hear the sound of their own voice or instrument. This can sometimes be difficult when surrounded by other singers or instruments; and in a church context when there is a congregation singing (often towards you!). To combat this, most amplified bands will use some form of audio monitoring. At its most basic it can involve at least one monitor speaker that band members can hear. Often singers and musicians will share foldback monitor speakers between them, generally out of necessity, simplicity or practicality.

Good monitoring gives greater enjoyment for singers and musicians and encourages and improves their performance. Consequently it improves the worship experience for the whole congregation.
Therefore, in an ideal world, each member of the band will have their own monitor with a unique ‘mix’ tailored to their requirement.

To achieve this you need a specific output from the mixing desk to a monitor speaker (or in-ear monitor) for each person in the worship band. This would give each singer / musician their own ‘mix’ i.e to hear exactly what they want to hear.

This output on a mixing desk for monitoring is often referred to as an auxiliary (or Aux) output. It needs to be able to be set on the mixing desk to ‘pre-fade’. Pre-fade means the signal is sent, from each individual input channel to a respective auxiliary output, before the signal reaches the channel’s fader (volume). This allows the auxiliary feed to the musician/singer’s monitor to be unaffected by changes made to the channel faders when the mixing desk operator is adjusting the main mix to the PA loudspeakers. The aux/monitor mix is therefore independent of the main PA mix. This gives singers / musicians a reliable, unchanging monitor mix.

Foldback monitor speakers are generally the easiest and least expensive way to allow the band to hear themselves. This can be a passive loudspeaker powered by separate amplifier. Or it can be a powered (or active) loudspeaker, that has a built in amplifier. Both take a direct feed from an auxiliary output from the mixing desk.

The latter has been much more popular in recent years because powered speakers generally offer more flexibility. They can be used stand-alone for any other PA use e/g children & youth work, fill speakers, mid week meetings, Alpha, Film night etc etc. They can also be daisy chained together.

The drawbacks of any form of monitor speaker are that they take up quite a lot of, often very precious, space and… they are noisy. Of course they do need to make ’noise’, and in large venues this isn’t often an issue, but in reverberant and/or small churches this additional volume can often create a problem. If monitor speakers are too loud, or there are too many, then the sound will reflect off the walls, or directly, to the congregation. This reflected sound is slightly delayed and usually has the effect of muddying the sound and/or seem like the main PA loudspeakers aren’t producing any sound.

One way to combat this is to have smaller monitor speakers closer to the singer / musician’s ears. This can allow it to be run at lower volumes and of course it takes up a bit less space. The Mackie SRM150 is a good example of a compact personal monitor – around £260. Following the logic of making loudspeakers smaller and closer to the ears ends up with …in-ear monitoring. 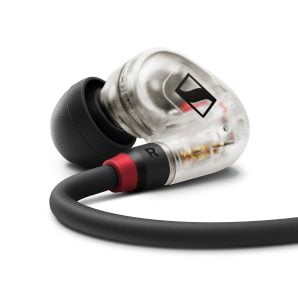 In-ear monitoring is fairly self explanatory and because many of us see it in action at events/conferences, and on television, it can feel like it’s the way to go to eliminate ‘on-stage’ noise and clear up clutter in the band area. Short answer is: it’s a good solution to these issues.

However, IEM is more involved and should be approached more cautiously than speaker monitoring as above. Part of this is dealing more directly with people’s hearing brings greater risk. And, therefore, the method of control and the set-up is even more crucial. The other aspect to IEM is that most ambient noise is usually shut out from an IEM user, what they hear in their ‘mix’ is even more important. For beginners this can feel quite isolating and disconcerting, it is common to see users taking one ear bud out to hear their surroundings (or the congregation). One way to get around this issue is to carefully use a local ambient mic to feed back in to the in-ear mix (See the Allen & Heath ME-1 controller below).

Most of us will have seen wireless IEM systems on TV or live and made the assumption that IEM is wireless. Wireless IEM does offer a lot of benefit, but mostly they offer the lack of a wire! For pro-musicians where budget is less of an issue it represents a good option. For most churches shelling out circa £1000 per IEM, it is an expensive option, especially when you consider most of the band don’t need to go anywhere and often half of them are sat down! Therefore wired IEM offers a lower cost option for the same, or if not, very similar monitoring experience. 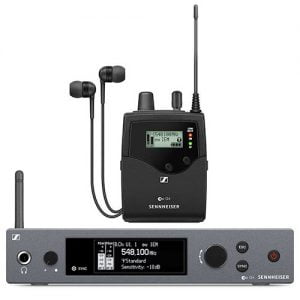 Sometimes wireless IEM can be useful for those leading stood up who may wander or need to move to different positions during the service. We recommend Sennheiser for wireless IEM applications. Their EW IEM G4 system (around £850 per IEM) is stereo but can be purchased as a twin receiver option and used in independent mono set-up. This effectively gives two independent mono feeds to two belt-packs for around £600 each.
I will also mention here, briefly(!), frequencies and licensing. Wireless IEMs use the same space as radio mics but often take up slightly more bandwidth and are therefore recommended to be spaced apart from radio mics. This inevitably needs to be in licensed frequency areas so there is an additional cost involved. DM can arrange this so it is not necessarily an issue, just another consideration and cost.

Wired IEM usually just involves using a suitable headphone amplifier with headphones/earbuds.The Aux input from the mixing desk goes in to the headphone amp and they will usually feature a volume control. Fischer Amps offer several types, the most simple of which start at around £60. Options that include a limiter start at about £120. Having a built in limiter is something I would suggest looking for as it does provide greater protection for hearing, particularly if the mix sent to the IEM is not controlled by the wearer. See ‘Control’ below.

Traditionally foldback monitors for musicians will be set-up and controlled by a PA operator. In live touring and concert venues this is often still the case where a skilled professional will work closely with musicians day in day out and know what the performers want in their IEMs. In a church context the reality of working with volunteer sound operators, musicians and singers, all on a rota, mean there can often be a range of experience, knowledge and ability.

With an analogue mixing desk there are few ways for a musician or singer to control the sound of their monitor besides hand signals or shouting at the sound operator. With larger mixing desk set-ups the inputs are spilt to a separate ‘monitor mixing desk’ or sometimes, if available, use ‘direct outs’ from the mixing desk to allow separate musician mixing for monitoring. These require additional hardware and controllers for each musician/singer. 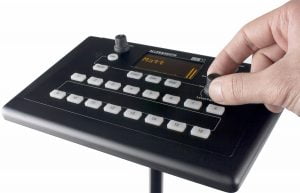 Digital mixing desks have opened the door to far greater, and easier, control of monitor mixing and IEM for the individual musician or singer.
Digital desks tend to have more outputs that can often be flexibly assigned for use as a monitor/auxiliary output. Most digital desks have the ability to be wirelessly controlled via an App on tablet or smart phone. Many also offer specific ‘clutter-free’ Apps for musicians to control their own foldback monitor or IEM. As the Apps are free and wireless set-up is low cost, there are few obstacles to gain easy access to remote monitor control for all of the band.

Some manufacturers, like Allen & Heath, also offer separate hardware controllers that can be daisy chained to the digital mixing desk via standard CAT cable. The Allen & Heath ME-1 controller (£440) offers headphone (with limiter) or monitor output and a built in ambient microphone.

Changing the way a music group / worship band operates can invariably lead to knock on issues. Here are some practical, technical and perhaps pastoral things to consider.

What should you hear in your monitor?

Moving a band to their own foldback monitor with individual control, all at the same time, can be difficult! Some won’t want or feel comfortable in controlling what they hear. They may prefer it to be set by the sound operator, or not know what they want to hear. Some simply may not want to hear themselves at all!
Often a good solution is to phase in control. To start with have the sound operator use a tablet and stand with musicians and singers and set the foldback levels together or in a visible, transparent way. This has several benefits. It allows the sound operator to hear what the musician / singer hears, it also allows the musicians / singers to see how changes to level affect what they hear. If done carefully this method can create trust between sound operators and the worship team. It then allows for more confident members of the worship team to connect using their own devices to set up their own foldback mix.

The flip-side to the above is when everyone wants control and everyone turns their monitor up louder and louder. This is sometimes referred to as ‘more me’. Where a singer or musician fight to hear themselves over the rest of the band and feel they need more of themselves in their monitor. Often what’s needed is rather than turning up what you want to hear, simply turn down what you don’t need. Practice, patience and understanding will all help to build trust and will be beneficial in getting a good balance for the musicians and the sound operator.

As mentioned above, moving to in-ear monitoring can be a great solution. But implementing it can be difficult. For those band members who haven’t used in-ear monitoring it can initially feel alien and quite isolating (see comments above about ambient mics to combat this). Rather than getting everyone trying IEM all at the same time, it can make sense to start with one headphone amp and move it round the group from week to week – each musician / singer using his or her own headphones.

For more information about this topic or a quotation created specifically for you.
Share
55

Upgrade to a Digital Mixer 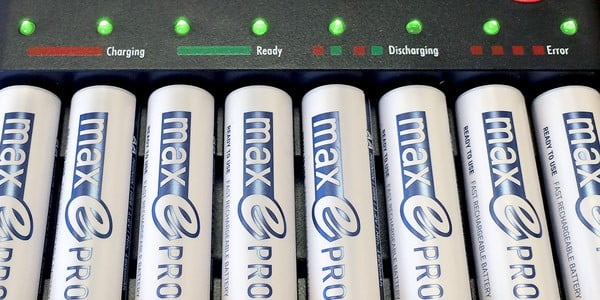 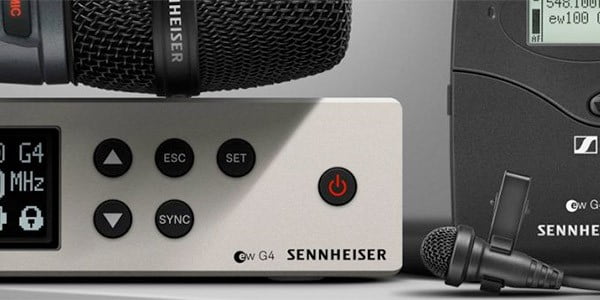